Subject: What is this?
Location: Wisconsin
August 6, 2012 8:11 pm
After a storm some branches fell down in the yard. My kids found this attached to one of them. It is about the size of a marshmellow. It looks to big to me to be spiders and I’m assuming spiders wouldn’t have egg sacs high up in trees. My kids have it in a bug catcher waiting for it to hatch. I am curious if we’ll have to wait until spring and if hundreds of little bugs will come out or just one large moth/butterfly
Signature: HOllie 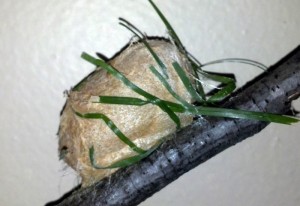 Cocoon of a Polyphemus Moth

Hi Hollie,
We believe this appears to be the ootheca or egg case of a preying mantis, but the grass adhering to it is confusing.  We wonder if that happened in the fall.

really you’re thinking praying mantis? That’s interesting because we hatched two praying mantis egg cases this year and let them all go in the yard but kept one as a pet. We have raised them before and I never would’ve guessed that just based on the size. I was confused by the grass as well. It was soft and squishy when they found it and now it’s hard. So maybe it was fairly new and then the rain on top of it pushed the grass into it? Some one told me they thought it might be a giant moth. I guess we will just have to wait and see 🙂 Thanks so much for the response! I’ll be sure to let you know when it hatches. Even if it’s next spring
Thanks again,
Hollie

Hi again Hollie,
We might be wrong, but your explanation of the grass becoming embedded when the mystery object was “soft and squishy” makes sense if this is a mantis ootheca.  It seems a bit early in the year for a mantis ootheca though, especially in Wisconsin.  We had thought of the possibility of a Moth Cocoon, but there does not appear to be any silk attaching the structure to the twig.  What tree did the branches come from?  Were the branches dead or alive?  Knowing if the tree is the known food source of any Moths would be helpful.  Most of the large moths that live in your area incorporate leaves into their cocoons in the case of the Saturniidae or form a naked pupa in the case of the Sphingidae.

There are three trees in the area it fell from and unfortunately, the only one I can identify is a maple, which is also the most unlikely one it came from. We just purchased this property about a month ago, so I’m unsure what these trees are. I attached some photos of the leaves. Whatever they are, something seems to be eating all the leaves, beetles maybe?. I tried identifying the trees on line. The best I could come up with was some sort of ash tree, or elm tree.  The more I look at it though, the more I think it is definitely not a praying mantis. Since we’ve raised those in the past I think I’d recognize it and it doesn’t seem to look the same as those, nor is it as hard. I also attached another photo of the cocoon (?) in question. I do see silky strands but not many. I don’t remember if the brach was dead or not, but I do not remember any leaves on it, and I remember breaking it off fairly easily, so Im guessing dead.
Thanks again 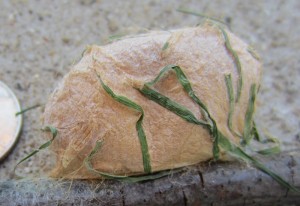 Cocoon of a Polyphemus Moth

Thanks for the update Hollie,
With the additional information and new photograph, we are now inclined to believe this is the cocoon of a Giant Silkmoth in the family Saturniidae.  It seems compact for a Cecropia Cocoon, but Cecropia Moths do not use leaves in the formation of the cocoon.  We will try to contact Bill Oehlke to see if he can provide any information.

Thanks for the additional info. I am excited to see what it is. I assume it will not hatch until next spring. My kids just love bugs and finding things to hatch is always exciting for them. Now that I’m confident it’s not going to produce a million small spiders i feel better about hatching it.

WTB? Contacts Bill Oehlke
Hi Bill,
This cocoon and its branch fell from an unknown tree in Wisconsin.  The grass most likely became adhered during the fall.  It seems compact for a Cecropia Cocoon.  So many Saturniidae use a leaf in cocoon construction.  Are you able to identify this cocoon?
Thanks
Daniel
What’s That Bug?

Bill Oehlke Responds
Daniel,
It is an Antheraea polyphemus cocoon.

Ceanothus Silkmoth Caterpillar after all