Subject: What bug is this?
Location: Raspberry leaf
July 17, 2015 2:06 pm
I found these on the back on a raspberry leaf from a plant I bought a few weeks ago. I’m guessing they’re stink bug babies, but not idea what type! Any help identifying them would be great. I’m located just outside of Bristol in the south-West of England
Signature: Lisa 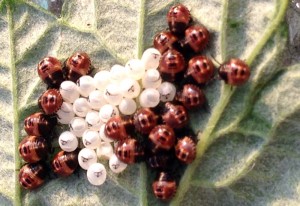 Dear Lisa,
As you suspected, these are hatchling Stink Bugs, and they bear a striking resemblance to hatchling Brown Marmorated Stink Bugs, Halyomorpha halys, which you can verify by comparing to this image on BugGuide. We are well aware of the rapid spread of this invasive Asian species in North America, but we did not know of any UK sightings, so we did some research.  According to a November 2014 posting on BBC News:  “An agricultural pest dubbed the stink bug could establish itself within the UK, according to a scientist.  Entomologist Max Barclay said it was ‘it is only a matter of time’ before the brown marmorated stink bug arrives in the country.  Two of the insects have already been found on imported timber headed for Britain.  The bug, which is native to the Far East, has already reached France and Germany.  Mr Barclay, from London’s Natural History Museum, told the Daily Mail newspaper: ‘I think the brown marmorated stink bug will establish a population here. It is only a matter of time.  It will make its presence felt fairly quickly because it comes into people’s homes in the autumn and winter.’  Its name comes from the putrid stench it releases from its glands when threatened.  The insect was first found in the US in the late 1990s, but has now spread across much of the country. Since then, it has become a severe pest of fruits, vegetables and ornamental plants.”  You might want to report this sighting to your local agricultural agency.  It is possible that the invasive Brown Marmorated Stink Bug eggs were on the raspberry plant when you purchased it, or it is also possible that they are already established, but passing unnoticed in your area.  It is also possible that this is a different species of Stink Bug.