What Drew the Black Witch to Wyoming??? Tachinid Fly emergence and possible Fungus from the UK

Subject: Beekiller?
Location: Germany
August 31, 2015 12:23 pm
Hi guys,
my dad found this in one of his beehives? It’s about 2.8 inches long and I have absolutely no idea what this could be.
Kind regards,
Signature: Benedikt 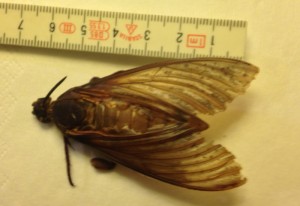 Dear Benedikt,
Would that we had a lepidopterist on our staff, we could conclusively provide you with an identification of this Hawkmoth based on vein patterns and other characteristics, but you have submitted your request to a pop culture site with artists, not entomologists, on its staff.  Since there are no scales remaining on the wings or body of this Hawkmoth in the family Sphingidae, our identification is conjecture.  We believe this is a Death’s Head Hawkmoth, Acherontia atropos, a species reported in Europe during the summer months.  According to Sphingidae of the Western Palaearctic:  “Many individuals have been seen to frequent bee-hives where, upon entry, they feed undisturbed on the honey, puncturing combs with their short, sharp proboscises. Moritz et al. (1991) have shown that this species makes itself ‘chemically invisible’ to honeybees by mimicking the cutaneous fatty acids of its hosts. If disturbed while feeding, or for that matter at any other time, the adults raise their wings, run and hop around, while emitting high-pitched squeaks.”  We don’t know what caused the loss of wing and body scales in your individual, which resulted in a loss of the visual characteristics of the species, including the thoracic pattern that has been likened to a human skull.  You did not indicate if the moth was found dead or alive.  We believe it would have been very difficult for your individual to fly in its condition, we causes us to conjecture that it lost its life once it entered the bee hive, though we cannot say if it was stung by bees as an intruder, or if your father killed it while attempting to collect it.  As we know of no other Hawkmoths that enter bee hives, we are relatively certain our identification is correct.  According to Encyclopedia of Life:  “Nectar and sugar eaters, adult moths like honey, and because they produce a scent mimicking the scent of bees, they can climb into hives without alarming the bees inside. Their thick skin also protects them from stings. Unlike the other two species which are more general in types of bees they raid, A. atropos only invades the hives of the Western honey bee, Apis mellifera. Another unusual feature of this moth is that it makes a loud squeaking sound as a protective device if it is threatened.”