Subject: Black mystery moth
Location: London, England
May 19, 2017 3:26 am
Seen in central London. At a distance first thought was a common black peppered moth, but up close it appeared just a bit too consistently glossy-black and its legs aren’t quite what I’d expect? Though granted my knowledge is minimal!
Signature: SJM 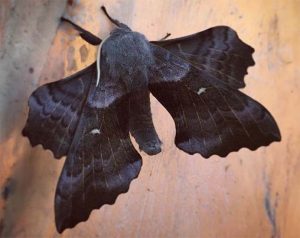 Dear SJM,
This impressive moth is a Poplar Hawkmoth, Laothoe populi, and according to UK Moths:  “Wingspan 65-90 mm.  Probably the commonest of our hawk-moths, it has a strange attitude when at rest, with the hindwings held forward of the forewings, and the abdomen curved upwards at the rear. If disturbed it can flash the hindwings, which have a contrasting rufous patch, normally hidden.  Distributed commonly throughout most of Britain, the adults are on the wing from May to July, when it is a frequent visitor to light.  The larvae feed on poplar (Populus), aspen (P. tremula) and sallow (Salix).”