Subject: Beetle I think?
Location: Thunder Bay, ontario, Canada
July 25, 2014 5:08 pm
Hey there. I live in a little town in the bush in ontario and I’ve never seen one of these around. Happen to know exactly what this one is?
Signature: Vicki 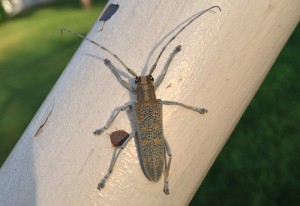 We certainly do Vicki,
This is a Poplar Borer, Saperda calcarata.  According to BugGuide:  “This species is of considerable economic importance on account of its serious injury to the trunks and larger branches of poplars. These trees rarely attain any size in New York State before showing the operations of this insect, and in not a few instances very serious injury is inflicted. This applies not only to neglected trees along road sides and in forests but also to magnificent specimens grown for ornamental purposes in parks.  Professor Riley, in his early writings, states that this insect has been universally destructive to cottonwoods and poplars in the western states, and Professor Bruner, in his paper, ‘The Insect Enemies of Ornamental and Shade Trees,’ states that this borer is by far the most destructive enemy of poplars and cottonwoods in the west. He further adds that it is almost impossible to grow these trees of any size in cities and towns of Nebraska away from the friendly care of birds and parasitic insects. (Felt and Joutel, 1904).”  With that stated, it is important to understand that this is a native species, and that it does fill an important place in the web of life associated with poplar trees.