Subject: Believed to be a polyphemus moth caterpillar
Location: Hickory, North Carolina
October 14, 2015 11:32 am
Hey, I found this little beauty on my porch, and I’ve been sitting with him for a few hours. At first he would hide his head, but has seemed to get somewhat comfortable with me. I thought you might like the picture.
Signature: Zeb Sterling Austin 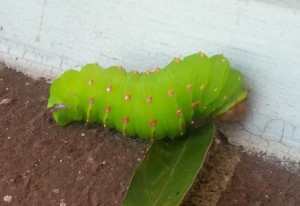 Dear Zeb,
We agree that this is a Polphemus Moth Caterpillar and we congratulate you on being able to distinguish it from a Luna Moth Caterpillar.  According to BugGuide:  “Larva: body large, bright green, with red and silvery spots below setae, and oblique yellow lines running through spiracles on abdomen; diagonal streak of black and silver on ninth abdominal segment; head and true legs brown; base of primary setae red, subdorsal and lateral setae have silver shading below; end of prolegs with yellow ring, and tipped in black”  Of the Luna Moth Caterpillar, BugGuide notes:  “Larva lime-green with pink spots and weak subspiracular stripe on abdomen. Yellow lines cross the larva’s back near the back end of each segment (compare Polyphemus moth caterpillars, which have yellow lines crossing at spiracles). Anal proleg edged in yellow.(2) Sparse hairs.”
We suspect your caterpillar might be preparing to pupate.  Put it near some fallen leaves that have not yet dried out and see if it spins a cocoon.

It has already started to spin it’s cocoon on my windowsill, and he’s making some definite progress. I’ll gladly include more pictures if you would like. I was absolutely ecstatic to see both the little guy and that you posted my request. I’ve followed the website since I was around 12, but have never really needed anything identified. I just wanted to make sure I was right. Thank you very much for making my day. (Although my girlfriend would probably like me to shut up about how excited I am.)
Many thanks,
Zeb 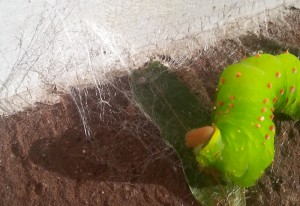 Hey, here’s an update on the little guy’s progress. He did something odd. (It may be normal behavior, I’m no expert) But he dragged strings of silk down nearly the entire length of the windowsill, then returned to work on his cocoon. It’s very interesting to watch him build.
Thanks,
Zeb

I apologize for the amount of emails, but something a bit funny just happened. The caterpillar was cold and curled up, and I started petting his back. Well he turned and started running his head against my finger like he was showing affection. I’m sure it was just checking out my finger, but it was incredibly adorable. 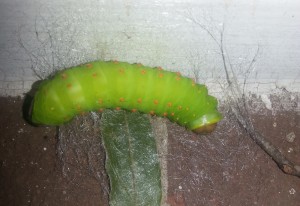 We believe the caterpillar is ensuring that the cocoon will be well anchored to the window sill.  Providing some leaves would be a nice assistance.