Subject: Large moth
Location: South Indianapolis
August 8, 2014 8:54 am
This large (7″ wingspan) moth showed up on our patio and spent a couple days hanging out. I live in an industrial area just outside of downtown Indianapolis. This was the week of August 4, 2014.
He wasn’t afraid of anyone getting close to him, so I was able to get some good photos.
Normally, all you can see are his main wings. Only when he starts to feel threatened does he expose his lower wings (and eyespots).
I’ve looked at hundreds of pictures of moths, but couldn’t find any that matched its unique markings. The closest I could find was a Cecropia.
Signature: Ben Mc 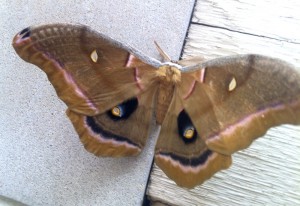 Dear Ben Mc,
Like the Cecropia Moth, this Polyphemus Moth is one of the Giant Silkmoths in the family Saturniidae.  Many moths in the family were given names that reference mythology, and Polyphemus was a one-eyed cyclops that figures into the Odyssey, the story of the journey of Ulysses, also known as Odysseus.

Daniel-
WOW! Thanks for getting back so quickly. I never realized how many moths there really were. And they’re not just those grey little things that eat your clothes!
Thanks for being such a great resource-
Ben Mc