Subject: Female polyphemus moth?
Location: Frederick, MD
August 22, 2012 10:01 am
Hi!
warning: this story has a tragic end.
I found this lovely moth while walking with my grandmother after a rain shower 2 evenings ago. She’s very beautiful, with 4 transparent wing spots and some lavender in her wings. Her body was quite plump, she had big eyes, and her wingspan was just about 4 inches. She was very slow and patchy, and had a torn wing. I took her home to mend her wing with a technique I’ve used with butterflies before. However, my grandmother’s cats found her while I was gathering supplies about the house; she survived the attack, but her wings did not. I put her in the garden and hope she laid her eggs before she was found so I am slightly less haunted.
Signature: Jenny 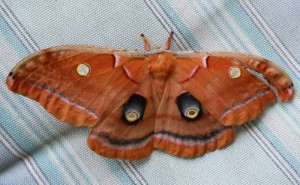 Dear Jenny,
Thank you for your poignant message.  Giant Silkmoths are frequently eaten by birds and other insectivores, but the number of eggs laid by the adult females, generally 200-300 eggs, ensures that enough will survive to adulthood to perpetuate the species.  We just posted an image of a Polyphemus Moth Caterpillar.  According to BugGuide:  “In southern United States, adults fly April-May and July-August (2 broods); in northern part of range, adults fly from May to July (1 brood).  Larvae present March to November.”  Based on that information, we suspect this individual hatched from eggs laid in the spring.  If she laid eggs, we would expect the resulting caterpillars to overwinter as cocoons to hatch next spring.