Subject: Unknown Alypia Forester Moth
Location: western Montana
July 28, 2014 2:04 pm
Can anyone ID this Alypia? I’ve gone through 4 different species, but the pattern of white patches does not match well to any of them. This photo was taken on July 28th, 2014 in western Montana. It was nectaring on Brassica weed flowers in open coniferous forest at approximately 3,400′.
Signature: Jeremy Roberts 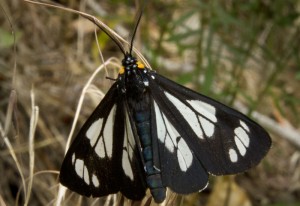 Hi Jeremy,
While your moth bears a superficial resemblance to the Forester Moths in the genus Alypia, the reason you had so much difficulty with a species identification is that your moth is in a different family.  This is a Police Car Moth, Gnophaela vermiculata,  According to BugGuide, the range is “southern British Columbia south to Oregon, northeastern Nevada, Utah, Colorado, and northern New Mexico” and it is found in “Typically foothills, mountain ranges, mid-elevations.”  As there are other similar looking members of the genus, we cannot say with 100% certainty that this is not a close relative of the Police Car Moth.

Thank you!  Indeed, I feel into a trap of my own making.  Police Car Moth it is.  And just in time for National Moth Week!
Thanks again for throwing down a rope.  I’m excited to plant some host plants in the yard now.
Cheers,
-Jeremy

You are most welcome Jeremy.  WTB? has co-sponsored a National Moth Week event with the MWHA in our local Elyria Canyon Park in 2012 and 2013, but that is not the ideal time for moth viewing in Southern California, so we are going rogue this year and having a local event when moths are more plentiful.