Subject: Strange bug nest
Location: Modesto, California
August 13, 2012 8:39 pm
Hello! I was outside walking my dog and saw what I thought was throw up. I took a closer look and realized it was not throw up, but a strange nest. When poked with a stick, the stick broke due to how tough this stuff was. When poked with a more DURABLE stick, a white liquid came out (but the stick eventually snapped). What might this all be? What type of bugs?
Signature: Kate 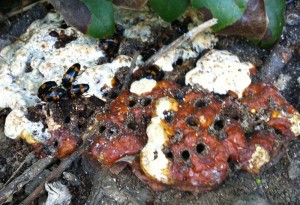 Hi Kate,
This is a most curious submission, and we are going to get a second opinion from Eric Eaton.  This is not a nest.  It is a fungus and the beetles are Pleasing Fungus Beetles.  The curious thing is your location in Modesto, California.  We are nearly certain that these Pleasing Fungus Beetles are in the genus Megalodacne as evidenced by the photos posted to BugGuide, however, Bugguide states:  “Two Nearctic species” are found in “Eastern United States and Canada.”  BugGuidereports them as far west as Texas.  We can’t help but wonder which of the following possibilities is the solution.  Perhaps there is an undiscovered west coast species, or perhaps the range of one of the two eastern species is much greater than originally supposed, or perhaps they were somehow introduced, either accidentally or naturally through range expansion.  Further research led us to the FSCA Coleoptera site that states:  “There are two species of this genus occurring in the eastern United States, and a record of a potenitally [sic] establishment in California.”  We will contact Paul E. Skelley who is posted that statement with your sighting.  HGTV states:  “Megalodacne fasciata, which is smaller and has slightly different markings on its back, has been seen throughout most of the East and Midwest, plus California.” 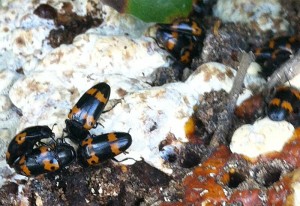 Eric Eaton Responds
Daniel:
Yes, Art Evans features Megalodacne fasciata in his Field Guide to Beetles of California.  He says they are most active at night, so a daytime image would be something somewhat unusual.
Eric