Costa Rican Fungus Beetle?
Is this a fungus beetle? It looks a lot like Gibbifer californicus, but lacks the patch of black in the middle of the abdomen that I’ve seen in every photo of the Pleasing Fungus Beetle. This beetle also seems to have a lighter blue color and has a black patch on the posteriormost tip. Could it be a relative? It was found at about 1000m elevation on the Pedregal Hill of the Cacao Volcano within the Área de Conservación Guanacaste, northwestern Costa Rica.
Scully 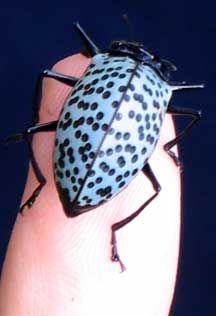 Hi Scully
According to BugGuide, Gibbifer californicus, one of the Pleasing Fungus Beetles, ranges into Mexico. Chances are good that it ignores the international borders and can be found in Costa Rica as well. If this is not the same species, it is at least the correct genus. There are often individual variations between the coloration of individuals and even more so in isolated populations.