On December 17, 2015 · Category: Soldier Beetles Tagged With: WTB? Down Under · Add Comment

Subject: What bug is this
Location: Sydney
December 17, 2015 12:57 am
Just wanna know what bug is this I’ve never seen before
Signature: How ever 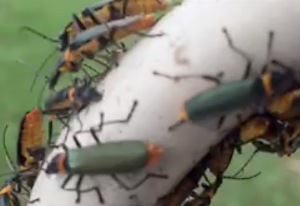 These are Plague Soldier Beetles in the genus Chauliognathus.  Despite the common name, they are not considered a threat to the plants, though large numbers might be considered a nuisance.  They are frequently found on flowering gum or eucalyptus trees because of the abundance of pollen.

Brown Leatherwing
Tagged with → WTB? Down Under
Location: Sydney, Australia