black caterpillar with red spikes
Location: Tucson, AZ
April 14, 2012 3:41 pm
Hello,
thank you for your great site. I have used it many times to identify bugs around my house. I do not want to waste your time but I have spent a lot of time trying to find my caterpillar on your site and attempted to google its features but was unsuccessful. This caterpillar? was found in our neighborhood. My daughter and I have made it a hobby to collect caterpillars and see what emerges. So far we have only found moths and have been ”hunting” for a butterfly in progress. Our newest addition lovingly called ”spike” by my daughter is yet to be identified. We are in Tucson Arizona and he was found on a weed. He doesn’t seem to have much of an appetite. We went out to get him more of the weed but he just seems to lick it and not eat it. Over night he climbed on a stick to the glass and spit green stuff on it. He is also very inactive and seems to move its ”horns” towards motion as if to try to intimitate. Needless to say this one is much different from the others we have harbored. Do you have any idea?
Thank you so much 🙂
Signature: Mother and daughter nature enthusiasts 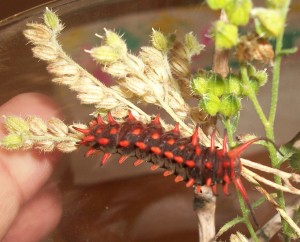 Dear Mother and daughter nature enthusiasts,
You caterpillar is quite distinctive and we recognized it immediately as the caterpillar of a Pipevine Swallowtail.  The adult Pipevine Swallowtail butterfly is a beautiful iridescent blue in color and there are orange spots on the under surface of the wings.  According to BugGuide:  “Larvae feed on Aristolochia species. These include “Pipevine” or “Dutchman’s Pipe”, Aristolochia species (tomentosa, durior, reticulata, californica), as well as Virginia Snakeroot, Aristolochia serpentaria. Larvae presumably take up toxic secondary compounds (including Aristolochic acid) from their hostplant. Both larvae and adults are believed toxic to vertebrate predators, and both have aposematic (warning) coloration.”  The plant in your photo does not appear to be in the correct family, so the caterpillar’s reluctance to eat could be because the wrong food is being offered.  We would urge you to try to find a food plant from the Aristolochia family at a local nursery in order to provide the correct food, however, if the caterpillar has matured, it might be preparing to form a chrysalis, in which case it would stop eating prior to metamorphosis.  Here is a photo of a native Pipevine from the Arizona Sonora Desert Museum Digital Library website.

Hello Daniel,
thank you for getting back to us so quickly. I wanted to let you know that we immediately went out to find the right food for the little guy only to be told that local buyers do not buy it and so local nurseries do not grow it. We were devastated. But watching the caterpillars behavior, it appeared as though he was going to form a chrysalis but he just kept falling off.  It looked like he was doing exactly what he was supposed to but could not finish and in the end the poor thing appeared weak and disoriented on the dirt.  We found out that he might eat parsley and immediately offered the food but he rejected it. Looks like this story will not have a good ending after all.  We did find one nursery today who claim to grow the exact plant you describe and we will pick it up tomorrow. It probably will not make a difference for our little guy but we will plant the native pipevine in our yard and maybe we will get to see a happy ending after all. Out of all the caterpillars we have taken in ,this one will be the first to fail. Even though we are both sad for our little “spike”, we will focus on a Salt Marsh Moth (identified on your site) instead, which should emerge for us any day now. Thank you again so much for your help and keep up your great work.
Sincerely,
Mother and daughter nature enthusiasts

Dear Mother and daughter nature enthusiasts,
We are sorry to hear about your lack of success raising the Pipevine Swallowtail Caterpillar.  There must have been a pipevine growing near the vicinity where the caterpillar was originally found, though it is possible it was weeded or removed by a person believing it to be unsightly or problematic is some way.  Often native plants are not as showy in a yard or garden as some cultivated plants, though the cultivated plants do not benefit native wildlife.  Including native plants in a garden scheme is an excellent way to encourage wildlife.