Big red/orange wasp type insect in Pennsylvania USA and Ontario Canada
Hello!
These photos were taken this past July just outside of Philadelphia. This guy was hanging out on the staircase outside of my building. It was sitting still with it’s wings tucked-in alongside itself, but when I got my camera in for the closeup, he got into this wings-spread stance. Maybe he’s camera-shy? Didn’t fly away though, and went back to his relaxed pose after I took the camera away. It appears to have a long, narrow appendage with a rounded tip sticking out of his backside, and a much shorter one just above it that is shaped like the tip of a fountain-pen. I assume this to be a stinger of some sort. That, and the coloration, lead me to believe he’s a wasp of some sort. I saw a second one about 3 weeks ago on the patio beside my parents swimming pool in Ontario Canada, about 550km northwest of the one I found in Philadelphia. What is this bug???
Jody Chambers 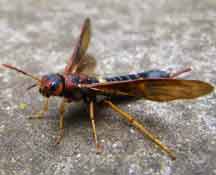 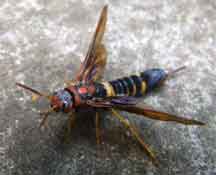 Hi Jody,
This is Tremex columba, the Pigeon Horntail. It is in the same insect order as wasps, bees and ants. It does not sting. The female uses the stingerlike ovipositor to place eggs beneath tree bark. The young are wood borers and the primary host insect of another fascinating creature, the Giant Ichneumon.