the mysterious beer bug
Hi, Bugman!
I live in south-eastern Ontario, and during all of the summers of my childhood, our picnics were plagued by little black and white beetles about a quarter of an inch long that loved our food and would bite if you weren’t careful. Coming from a family of teetotalers, we called them “food bugs”. Later, I heard them called “beer bugs”, but I’ve not yet come across a person who knows what kind of beetle they actually are, and my web research has revealed no clues. Can you enlighten me? Thanks!
Jaimie Cowles 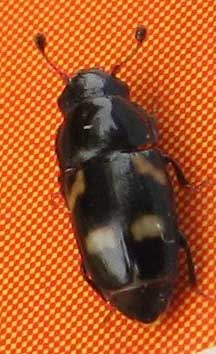 Hi Jaimie,
Our initial impression based on the shape and antennae, is that this is either a Sexton Beetle in the genus Nicrophorus, or some other Carrion Beetle in the family Silphidae. Sexton Beetles are characterized by red markings and we couldn’t find any matches on Bugguide. We are going to try to contact Eric Eaton, but we know he is having computer problems and may not respond for some time. Meanwhile, perhaps a reader can assist.

Update from Eric Eaton (08/04/2008)
Daniel:
The black beetle with the four yellow marks is a sap-feeding beetle in the family Nitidulidae. This one is probably Glischrochilus quadrisignatus, better known as a “picnic beetle.” They will sometimes fly to picnics in large numbers, attracted mostly by fermenting fruit, and probably alcohol, too. Not harmful in the least, just annoying:-)
Eric