Subject: Whats this new ant?
Location: Southwestern, Ontario, Canada
November 27, 2012 8:45 pm
Hello bugman,
Me and my boyfriend moved into an apartment in September. When we were signing the lease I noticed an ant on the counter and didn’t think much of it. I grew up in the country and ants were always around. (I live in southwestern Ontario) Be diligent, set traps, keep your food locked up tight and they will go away. Within a few weeks the place was swarming with ants, they were coming out of the outlets, the grout between the tiles, holes in the shower grout, they were all over my cloths in the closet, in the bed and in the laundry hamper in the hall. I did my research and discovered they were pharaoh ants.. the apartment must be infested from top to bottom judging by my place. I guess the only upside is that they are the enemy of the bedbug, a bug that I distaste with a burning passion. Anyway we set traps and they went away for about two weeks, and then out of nowhere the ants in the bathroom and kitchen exploded again, new eggs hatched? Different colony taking over? The y did not follow the pharamone scents of the last colony and I had to set new traps in their path of choice. Anywhoodle, in the bathroom I found three curious looking ants stuck to the soap bar when I went to take a shower. They are around the same size as the rest of the ants, maybe a little bigger but they are a bit lighter, and their bums are stripped. Was wondering if they are the same kind of ant? Did we force the protectors to search for food instead of the regular foragers?
Signature: Defeated Apartment Dweller 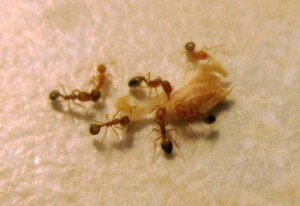 Dear Defeated Apartment Dweller,
We agree that these are most likely Pharoah Ants, Monomorium pharaonis, but your second photo is quite blurry and we cannot say for certain that those ants are a different species.  The Pharoah Ants pictured on BugGuide are darker than the individuals in your photo.  BugGuide does indicate:  “The species Monomorium pharaonis is introduced, present in the whole world, probably originally from Africa. It is major indoor pest in the US. In colder climates it lives in heated buildings.”

Bug of the Month May 2018: Citronella Ants
Location: Canada