Subject: Please can you help me to identify this?
Location: South América Ecuador Pichincha near LLoa “town”
August 12, 2015 9:54 pm
Hi thank you so much for reading this. I was wondering if you. can help me with this. I found this by a river in South América it was found in LLoa about 30 minutes from Quito the capital city of Ecuador. It was found on the. higlands at about 3000meters near the rainforest.
Signature: Ecuador identification 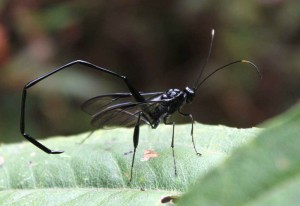 This is a Pelecinid, a parasitic wasp in the family Pelecinidae, and it is the first example we have ever received from outside North America.  According to BugGuide:  “One North American genus with only one species: Pelecinus polyturator Drury 1773. Worldwide, there is only one extant genus, Pelecinus, with three recognized species (Johnson and Musetti, 1999):
Pelecinus polyturator (North America, Central America, South America)
Pelecinus thoracicus (western Mexico)
Pelecinus dichrous (South America)
The family was much more diverse during the Mesozoic era (Beetles in the Bush).”
We are not certain which of the South American species your individual represents.  Pelecinids prey upon the subterranean larvae of Scarab Beetles, and the female uses her long, flexible abdomen to lay eggs underground in proximity to the Scarab larva.  Beetles in the Bush has a very nice posting on the genus with this information:  “Pelecinus polyturator is the only North American member of the family Pelecinidae, which itself contains only two additional species that are restricted to Mexico and Central/South America. It wasn’t always this way—fossils assignable to the family and representing 43 species in a dozen genera have been found as far back as the early Cretaceous (121–124 mya) across North America, Europe, and Asia (Grimaldi & Engel 2005). Surely this represents just the tip of the iceberg of Mesozoic and early Cenozoic pelecinid diversity, making today’s three species the last representatives of a once great lineage—’living fossils’ some might say.”

Thank you so much for your answer!
I will definitely make a donation for you guys.
thank you again.