Subject: bees
Location: costa rica
May 19, 2013 2:07 pm
Hi!
we saw these nest of bees, in Costa Rica.
We saw very well the activity inside the nest!
Any idea about the species? Not easy, I can believe!
thanks
fred
Signature: fred from belgium 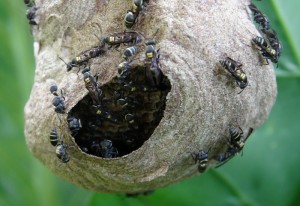 Hi Fred,
These are not bees.  They are Paper Wasps in the genus Polistes. 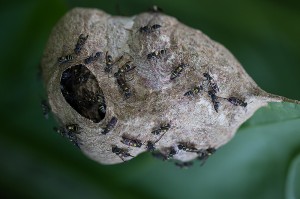 We found a matching photo on Nature.Com on a page entitled An Introduction to Eusociality, but they are only identified to the genus level. 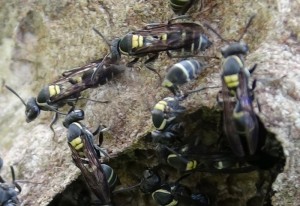 Correction courtesy of Cesar Crash via comment:  Polybia species
Thanks to Cesar’s comment, we looked up his link to the Animal Communications Project where we scrutized the photo of the Polybia Wasps.  We did a web search of the genus and found BugEric which mentions they are Vespid Wasps.  Eric writes:  “Thanks to Google image searches, I eventually pinpointed the wasp as the species Polybia emaciata. It is one of the few social vespid wasps that builds its nest of mud instead of paper. The more durable nature of the mud envelope allows the wasps to “hunker down” or flee when faced with a potential attack by a vertebrate predator. Contrast this behavior with the violent attacks launched by social wasps that build relatively flimsy nests of paper.”  Thanks to Eric’s comments, we have moved this to the Hornets and Yellow Jackets category.