Subject: Wasp of some kind
Location: North Carolina
October 18, 2015 7:12 am
Hey bugman , just wondering what type of bug is this??
Signature: Ace 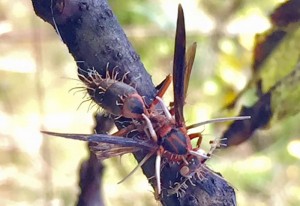 Dear Ace,
This insect is a Paper Wasp in the genus Polistes, however, its appearance has been altered by a fungus infection that eventually killed the wasp.  This is, to the best of our knowledge, the only image we have on our site of a Paper Wasp consumed by fungus, but we do have images of a Tarantula attacked by Fungus, Cellar Spiders with Fungus Infections and a Raspy Cricket with a Fungus Infection.  Here is an interesting article from National Geographic on Mind Control Fungus and there is also a National Geographic image of a wasp infested with fungus.