wasp
Hi,
I am the operations manager at a large retreat Center and Summer Camp in Dallas Texas. We have a tall tower that the kids ride a zip line down. Every Fall these wasp swarm the tower. They are not aggressive, but needless to say, kids running and swatting at wasp 50′ in the air is not good. There are no nest, just hundreds of these wasp flying around the top of the tower. the strange thing is they are just at the top of the tower and no where else.
The attached pics are of the wasp. pic_a wasp are larger than pic_b wasp. There seems to be a equal # of both. I don’t know if they are the same species and pic_b is a juvenile. We have tried wasp spray and smoke to no avail. Any ideas???
Thanks for the Help
Ronney 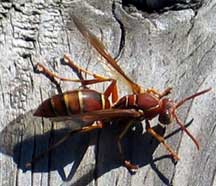 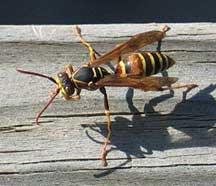 Hi Ronney,
Your wasps are Paper Wasp from the genus Polistes. They inhabit meadows fields and gardens where they take nectar from flowers and they are often found near buildings. They are social wasps. Several females work together to construct an uncovered paperlike, hanging nest made of wood pulp and saliva. The Audubon Guide to Insects and Spiders goes on to say that : “One female becomes dominant queen. Ist few generations in summer are all females, cared for as larvae by unmated female workers. Unfertilized eggs produce fertile males. Only mated young queens overwinter under leaf litter and in stone walls. Old queens, workers, and larvae die. Paper Wasps are much more tolerant of people and minor disturbances than are hornets and yellow jackets.” Your species is probably Polistes apachus which occurs in Texas, New Mexico, southern California, and Mexico.