Mysterious Bug
Location: California
August 2, 2011 12:27 am
Hey guys, I was recently out walking in my backyard and I found this bug squirming on its back. It was an interesting looking one and so I thought I would post it here and see what you guys have to say about it. Every time I flipped it over, however, it would flip itself back onto its back and squirm there. I found another one that was running every which way searching for something. Then, I found another that was lying on its stomach flailing its limbs. After I did some digging, I found out that my neighbor recently sprayed his yard with poison, and apparently these things were caught in the cross-fire. How unfortunate, they are really something special with their size.
Signature: Josh 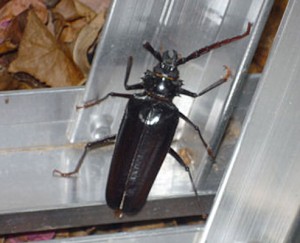 Dear Josh,
We are taking tremendous creative license with tagging your letter, because generally the person who submits the email is the person implicated in our tags.  In this case, we are charging your neighbor with unnecessary carnage, but not necessarily for just the Palo Verde Root Borer, Derobrachus hovorei, that you photographed.  We don’t know what was targeted by your neighbor, and perhaps he has a cherished Palo Verde tree that was compromised by a larger than usual population of Palo Verde Root Borers.  Adult Palo Verde Root Borers are not the damage producing phase of the insect.  The larvae are the borer and insecticide will most likely not penetrate to the root of the problem.   Sadly, insecticides are indiscriminate in the lives they take, and beneficial as well as injurious creatures may succumb.  Birds and Lizards might also become collateral damage by exposure to strong doses of toxins administered by an amateur.  You may read more about the Palo Verde Root Borer on BugGuide. 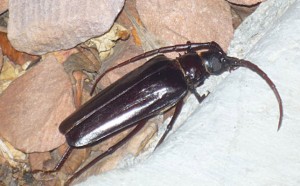