deung duong
They farm it in South Thailand. These pictures are from the country in Nakhon Si Thammarat. Are they a larvae or grub? Their natural habitat is infesting coconut trees I was told.
Gary J Chandler 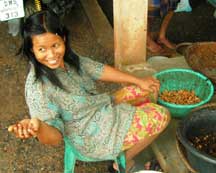 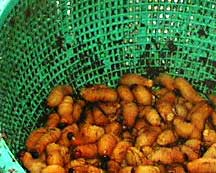 Hi Gary,
In parts of the world, the Red Palm Weevil is a serious agricultural pest. According to the Red Palm Weevil website: “Red palm weevil Rhynchophorus ferrugineus , has different common names such as coconut weevil, Asiatic palm weevil, or Indian red palm weevil. It is a serious pest for coconut in some Asiatic regions and an important pest for the date palm in the Near East. It was recorded in some Arabian Gulf States during eightieths and then reported as a destructive insect for date palms in Egypt at 1992 (Saleh, 1992; Cox, 1993). ” We believe the insects in your photos are either the Red Palm Weevil or a closely related species. Beetle larvae are known as grubs, and Weevils are beetles, so you can refer to these creatures as either larvae or grubs. They are considered edible in Thailand where many other insects are eaten as well.