A Pair of Stump Stabbers

Subject: Male & female Giant Ichneumon Wasps
Location: Naperville, IL
September 22, 2013 9:27 pm
Hi Daniel~
I spotted these male and female Giant Ichneumon wasps hanging out on a dead river birch tree when the female began to oviposit directly into the exit hole of what I assumed was a pigeon horntail wasp. I did find the remains of the lower half of a pigeon horntail, its ovipositor stuck firmly into the same tree. It appeared as if the Ichneumon’s ovipositor separated into three sections; all three went into the hole, but only the longer, blacker section remained inside the hole throughout the process. I thought that Ichneumon wasps drilled directly into dead wood after echo-locating a pigeon horntail larva, but perhaps she was using the inside of the exit hole as a starting point. It was fascinating to watch!
All the best,
Signature: Dori Eldridge 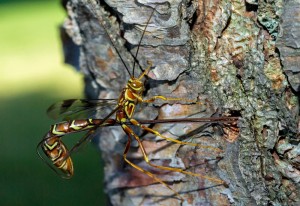 Hi Dori,
We love the common name Stump Stabbers for Giant Ichneumons in the genus Megarhyssa.  We believe your individuals are Megarhyssa macrurus. 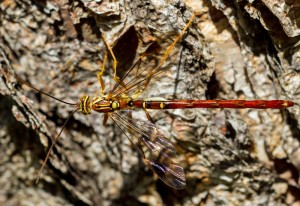 Update:  April 8, 2014
We are frequently asked if Giant Ichneumons can sting, and we always reply that they cannot.  We just found a fascinating article.  According to Icheumon Wasps by Lloyd Eighme on Skagit.wsu:  “It might frighten you, but if you could watch it long enough you would be amazed at what it does. It lands on the bark of a tree and crawls up and down, tapping with its long antennae, obviously searching for something. Eventually it finds the spot it is looking for and begins to drill into the bark with its long needle-like ovipositor. It has detected the larva of a horntail wasp chewing its tunnel in the wood an inch or more below the surface of the bark. The ovipositor is made up of three stiff threads, hardened by minerals, that fit together with a groove in the center. Vibrating those sharppointed threads forces them into the bark and sapwood of the tree to contact the horntail grub in its tunnel. An egg is forced down the ovipositor to parasitize the grub. If the ichneumon parasite larva killed its host, they would both die, trapped in the solid wood which the parasite is unable to chew. It only feeds on the nonvital organs like the fat body until its host has nearly completed its life cycle and has chewed its way out near the surface of the bark. Then it kills and consumes its host grub and completes its own life cycle to emerge as another giant ichneumon wasp in the genus Megarhyssa (mega=large; rhyssa=tail) to start over again. You can see both Megarhyssa and its horntail wasp host in the MG collection.
People often ask if the ichneumon wasps will sting them with their needle-like ovipositors. The wasps are interested only in laying eggs in caterpillars or other insects, but if you handle a live one it may try to sting you in self-defense. Small ones could not likely penetrate your skin, but larger ones might be able to

One Response to A Pair of Stump Stabbers