Painted Lady nectars from Zinnia
Location:  Mount Washington, Los Angeles, CA
August 20, 2012
Though we spent about two hours today trying unsuccessfully to get a high resolution image of a Western Tiger Swallowtail, we are pleased with these photos of a Painted Lady, Vanessa cardui,that enjoyed the nectar from a zinnia. 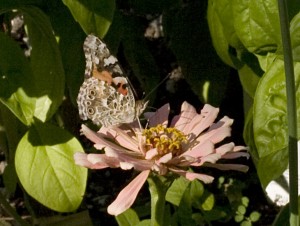 Upon closely examining the photos, we were able to determine that this was a Painted Lady as opposed to a West Coast Lady.  According to BugGuide:  “Also similar is West Coast Lady, Vanessa annabella, but Painted Lady has the large subapical spot near front edge of front wing white; the discal cell of front wing has two (roughly) triangular dark spots; and dark spots on the upper hind wing are most often not or only faintly centered with blue (blue centers more common in the Southwest than elsewhere). In West Coast Lady the oblong spot is a bit larger and orange; there is a dark bar crossing discal cell; and dark spots on the hind wing above are usually prominently centered with blue. Undersides are very similar, but the same pattern differences show on under front wing as on upper side, and eye spots on the hind wing are usually round or oval in the Painted Lady, while at least some are usually heart or kidney-shaped in West Coast Lady. Orange coloring of West Coast Lady less likely to look pinkish than in other two Lady species (where the hue is more varied).” 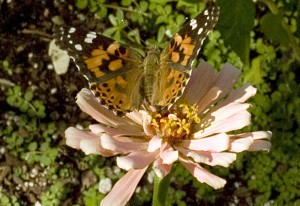