Whats this bug??
I need help identifying the attached bug. Please review the photos and advise if you have any idea what this is!!! I have attached a photo of the top and bottom of the bug.
Thank you!
Janet Cox
Clarksburg, West Virginia 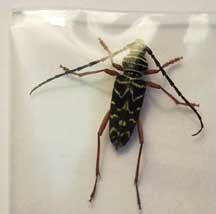 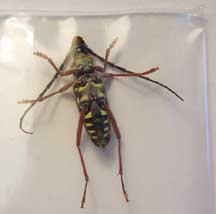 Hi Janet,
Your beetle is one of the Long Horned Borer Beetles from the genus Megacyllene. Your beetle looks like the Painted Hickory Borer, Megacyllene caryae which closely resembles the Locust Borer, Megacyllene robiniae. The telltale markings of the Painted Hickory Borer include the third stripe on the elytra which is W-shaped followed by three additional sinuous stripes. This species is usually found in the spring, while the Locust Borer is found in the fall. Larva feed on the wood of hickory, ash, hackberry and Osage orange trees.