Subject: Large Beetles
Location: Hereford, AZ
August 8, 2015 10:52 am
I found this guy in front of my garage in Hereford, AZ in early August, 2015. He’s about two inches long and very shiny. I’m thinking it might possibly be a rain beetle but it doesn’t seem hairy enough. He kept getting flipped on his back and couldn’t get himself upright until I helped him. Can you identify this large beetle?
Thank you!
Signature: Chuckys Mama 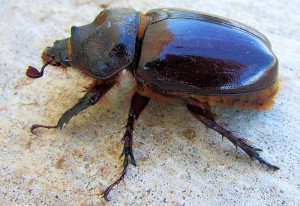 Dear Chucky Mama,
This is an Ox Beetle in the genus Strategus, and initially we thought this was a female Ox Beetle as the males have horns, but the antennae look more like the antennae of a male.  According to BugGuide, there are both major (horned) males and minor males lacking in prominent horns.  While the sex of your beetle is still uncertain, we are confident that the genus is correct.  There are several members of the genus found in Arizona, and they look quite similar, and we would defer to a beetle expert’s opinion on the species. 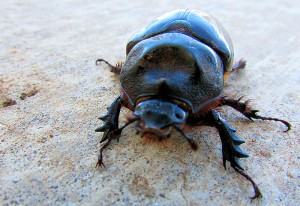