Cool Moth
Hello,
I live near Los Angeles, CA and saw this fella laying some eggs on a tire of a car the other day and thought I would take some pictures of it. It was sitting totally still and I wanted to see if I could get a closer look. I decided to see if I could get it to spread its wings a little so I took a little twig and touched its wing. To my surprise it spread its wings and started dancing about. It showed these really cool markings on it’s inner wing that looked like big eyes. The inner wings were brightly colored compared to the rest of its brown body. It was sure cool to see. I wanted to see what kind of moth it was and stumbled across your site. I am hoping you will be able answer my question. Best Regards,
Mike 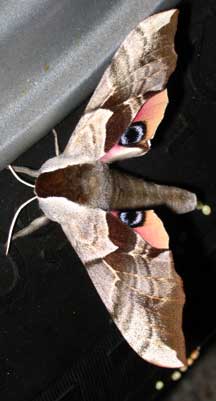 Hi Mike,
We believe this is a One Eyed Sphinx, Smerinthus cerisyi, sometimes called Cerisy’s Sphinx. This species is found in California, but we thought it was limited to the more northern parts of the state. Your moth also resembles the Salicet Sphinx, Smerinthus saliceti, which is found in San Diego county and points south. Our money is on the former, the One Eyed Sphinx, but the two moths look remarkable similar. We may try to contact Bill Oehlke to see if he has a definitive answer.

1 thought on “One Eyed Sphinx or perhaps Saliset Sphinx”