Subject: Oleander Hawkmoth
Location: Downtown Honolulu
July 13, 2012 8:58 pm
We just found this beautiful moth in our building located in downtown Honolulu. Apparently he/she has been hanging around for the past 5 days so I’m taking him/her to a forest reserve. I hope they are not harmful to our environment. Are they common in Hawaii because nobody has ever seen one.
Signature: Edwin and Roselani 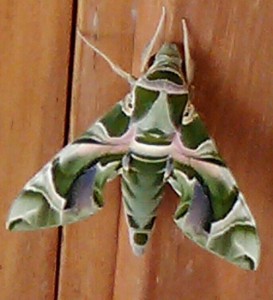 Mahalo (thank you) for responding.  We took the moth up next to a forest reserve and set him free.  I’m sure he’ll find some oleander around because it’s used pretty extensively around here.
He was the star guest at our company on Friday and everyone was amazed at how beautiful he was.
Aloha!
Roselani and Edwin

a pair of Striped Morning Sphinxes

3 Responses to Oleander Hawkmoth in Hawaii