zoomed in pic of moth
Hi bugman,
I wrote a week ago asking what kind of moth this was. I was looking at the pic I emailed in and noticed I couldn’t zoom in very much before it got blurry. So I cropped the original (I was too lazy to get my hard drive out and get the original the first time.) So here is a better zoom in of it. Like I said before we found it in our front yard on a rose bush, and we live in Turkey, close to Adana. I thought it was such a beautiful moth. Thanks,
Steph 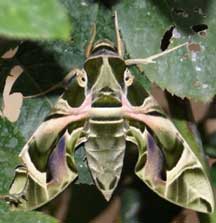 Hi Steph,
Thanks for resending your photo of an Oleander Hawk Moth, Deilephila nerii or Daphnis nerii. This truly beautiful moth has an extensive range due to the use of its larval food plant, the Oleander, in landscaping. Bill Oehlke has the following information posted to his awesome website: “primarily associated with ‘the southern Mediterranean region, North Africa and the Middle East to Afghanistan (Ebert, 1969). Along the Mediterranean, there is no clear distinction between resident and migrant populations. Permanent populations exist in suitable locations in Sicily, Crete and Cyprus; however, over a number of favourable years further colonies may be established in those islands and also in southern Italy and southern Greece, all of which die out during a hard winter.’ and ‘Extra-limital range. From Afghanistan eastward to south-east Asia and the Philippines; as a migrant, it penetrates northwards into central Europe and central southern Asia. In 1974, this species was recorded as having established itself in Hawaii (Beardsley, 1979).’ “