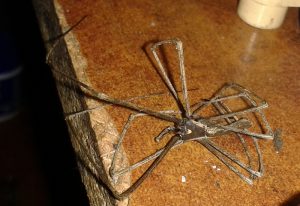 Dear Shane,
We are relatively confident we have correctly identified this leggy spider as an Ogre Faced Spider in the genus Deinopsis from the Net Casting Spider family  thanks to images on iSpot.  According to BioDiversity Explorer:  “They are harmless to man” and “Deinopids are unique in that they actively use and manipulate a web to capture prey. First a scaffold web is constructed and attached to the vegetation over an area where prey will pass. The spider then positions itself with its head up and using a comb-like structure (cribellum) on the tibia of its hind legs, it combs out cribellate silk from a special silk-producing organ called the calamistrum. The calamistrum is a cream coloured band about 1.5 to 2 mm long and about 0.2 to 0.5 mm wide and is situated anterior to the spinnerets, viewed from below. It consists of 20 000 to 40 000 spigots (silk-producing organs), each producing a very fine strand of silk. The silk is combed out onto the normal silk strands of what will be the capture net and has a woolly appearance. In fact, the silk looks like this as it is in a relaxed form, like a relaxed rubber band and has a 400 to 600% stretch capacity. The rectangular capture net made of this crumpled silk has no adhesive capture ability but relies on entangling properties instead – much like Velcro, where the net tangles with projections on the prey’s body.
When the net is ready the spider re-orientates itself on the scaffold web with the head facing down, grasps the net by the four corners with the four front legs, gives it a few stretches, and then relaxes the net and waits for prey. For walking prey, the net is held horizontally or vertically over the substrate and when flying prey is detected, the net is flicked backwards, over the carapace, still in a vertical or horizontal position. Visual senses are used to detect walking prey such as cockroaches, ants and even spiders but vibration senses are used to detect flying insects, moths being the most common prey.
When prey is detected, the spider propels itself forward, stretching the net further and then suddenly releasing the tension, although not letting go of the net. The net contracts and ensnares the prey. Once captured, the prey is then secured further with silk fed from the spider’s spinnerets with the hind legs. While the scaffold net is reused each night, the capture net is used only once. A new capture net is constructed each evening and in the morning it is simply rolled into a ball and eaten.“