Grasshopper?
I didn’t see this grasshopper at your site. The photo was taken in Baker County Georgia. Unfortunately I can’t remember the size of the grasshopper. It did fly.
Zaroga Goff 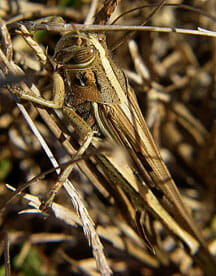 Hi Zaroga,
We are fairly certain that this is an Obscure Birdwing Grasshopper, Schistocerca obscura. It is found in the south, including Georgia and Florida. It is found in fields and open woodlands, according to BugGuide. The pale yellow dorsal stripe is a distinguishing feature. Eric Eaton also offers this possibility: ” The obscure bird grasshopper is actually more likely to be the American bird grasshopper, Schistocerca americana. The markings are pretty consistent in that species, much less ornate on most of the other Schistocerca. After all that, I’m not saying you aren’t correct already. It is a tough genus.”