Subject:  Northern Green-Striped Grasshopper
Location:  Occoquan, NWR, Occoquan, Virginia
April 13, 2017 4:18 PM
Dear Daniel,
I figured out that this is a Northern Green-striped Grasshopper, but since you don’t seem to have any photo in your database, I thought I’d send these photos on to you. Thanks for your wonderful site. I photographed this today at Occoquan NWR, in Occoquan, Virginia.
P.S. I’d like to contribute, but am not a fan of entering personal data onto my computer. Just let me know how to make the check out to and where to send it.
Best regards, Seth 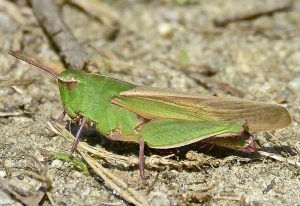 Dear Seth,
Thanks so much for sending in your beautiful, high resolution images of the subspecies Chortophaga viridifasciata viridifasciata, the Northern Green-Striped Grasshopper, which is also pictured on BugGuide where the range is listed as “from northern portions of southeastern states northward across most of United States and southern Canada. Rare west of the Great Plains, but occurs in pockets with favorable habitat, and may be introduced in some areas.”  According to BugGuide, the Southern Green-Striped Grasshopper has the more limited range.  Of the species, BugGuide notes:  “Adults in spring and early summer in North. Southward multiple-brooded with adults from end of winter to begining of winter, and in far south may be found year-round.”  We were quite curious about the spring appearance of an adult, but BugGuide clarifies with this information:  “Nymphs overwinter, producing adults in early spring; often the first grasshopper seen in spring. Two or more generations occur south from about Virginia, the Ohio Valley, and Nebraska. In the low Southeast, multiple overlapping generations occur, and adults and nymphs may be found together through much of the year.  Overwintering nymphs — Thought it worth a comment here to point out that in this species, and a few others, the nymph is the overwintering stage. The eggs hatch in late summer or autumn, and half grown to nearly mature nymphs overwinter through the winter. That is why the adults appear early in the spring; the nymphs are already well along when spring comes, and only have a little growing left to do. Most grasshopper eggs hatch later in the spring or early summer when it heats up, but by then the adults of many of these early (or is it late) species are long gone already (or old anyway).… David J. Ferguson, 16 October, 2007.”  Thanks for your generous offer.  We fully understand your reluctance with sharing personal data.  We really do have a love/hate relationship with computers in the 21st Century. 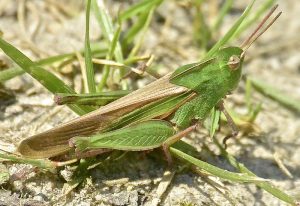