Thank You!
I’ve was beginning to think no one knew what kind of Sphinx moth this is. Thank you. The time stamp on the photo says it was taken at 4:27 p.m.; it was actually taken at 3:27 p.m., March 6th. In order to get a clear photo I had to use the flash. Hence, the wings aren’t transparent as they are in other photos I’ve taken of this critter. The photo was taken 7 miles north of Lake Wales, Florida which is roughly in the center of the state. So the range is greater than previously thought to be.
Great website!
Joyce Gelnaw 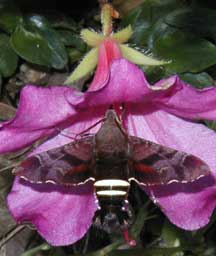 Hi Joyce,
Thank you for the compliments. Your Sphinx Moth is not one of the Hummingbird Clearwings, but rather the Nessus Sphinx, Amphion floridensis, formerly Amphion nessus. It ranges from Canada to Florida and west to Texas. The moth commonly flies during the day. Its markings, including the stripes on the abdomen, are quite distinctive. You can get more information on the silkmoths.bizland site.