Ed. Note:  Despite the signature, this is NOT an inside job

Subject: Angry moth in northern Nevada
Location: Northern Nevada
January 10, 2017 3:56 pm
Hey asshole, if you spent as much time crafting mocking replies to your so-called “””nasty readers””” as you do researching what species the bugs are, you wouldn’t HAVE any angry clients. Take my email adress OFF my submission, I dont need more spam. I dont care what your “terms and conditions” are.
Signature: Daniel Marlos 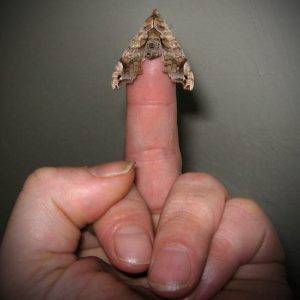 Dear Trashface, AKA Daniel Marlos impersonator,
We were so stunned by your virulent letter with its inflammatory image that there is no question in our mind that you deserve the Nasty Reader tag, and we strongly suspect that you are deliberately vying for that coveted award.  Your efforts have paid off.  Your assessment that we spend much more time researching submissions to our site than we do “crafting mocking replies” to our “so-called “”nasty readers””” is absolutely correct.  Since your letter is only the 12th Nasty Reader we have tagged in our 15 years of running What’s That Bug?, a site currently with  23,437 unique postings, only .051% of our responses were to readers deemed by us to be nasty.  We don’t believe we have that many angry readers, and we can deal with those odds as we learned long ago that “you can’t please all the people all the time.”
That stated, we are ready to get down to identifying your Sphinx Moth from the family Sphingidae, and trust us when we say we spent a great deal more time with that task than we did crafting our first paragraph in response to you.  We could not locate your moth in the Sphingidae of Nevada, the Sphingidae of California, nor the Sphingidae of Idaho pages of Bill Oehlke’s awesome Sphingidae of the Americas site.  At that point we contacted Lepidopterist Julian Donahue who confirmed the family Sphingidae, but neither he nor Eric Eaton were able to provide a species name.  We wrote to Bill Oehlke and he provided us with the correct identification.

Bill Oehlke identifies Deidamia inscriptum
Daniel,
It is Deidamia inscriptum. I have not seen any previous reports from Nevada, but it is known for sure from eastern Texas all the way to the east coast so it may well be in Nevada and just hasn’t been documented there before. It is also possible that it was inadvertently imported into Nevada as a pupa in soil at base of some potted plant that was transported across state lines. Maybe a storm with high winds brought it to Nevada. Maybe it is a hoax. You could just indicate it is Deidamia inscriptum which is not native to Nevada. Do you have a more precise location in Nevada?
The Sphingidae are strong fliers and can get energy from flower nectar or fermenting fruit, so it might even have flown there, but it appears to be a fresh specimen, so my guess is it is a wrong location or an accidental import. Maybe it came in the soil as pupa in a potted Christmas plant.
Hope you had a great holiday season and have a great new year. Time flies.
Bill

Thanks to Bill Oehlke’s identification, we were able to locate the Lettered Sphinx on the Sphingidae of the Americas site, and we learned that it “flies from New Hampshire south to northern Florida and southern Alabama (Houston County (JS)); west to Minnesota, Nebraska, Oklahoma, and Texas. The specimen type locality is Indiana. It also flies in southern Ontario and is occasionally seen in southern Quebec” and “In Greek literature, Deidamia was one of Lycomedes’ daughters, and she bore a son, Neoptolemus, for Achilles.  The species name ‘inscriptum’ MAY ? have been chosen for the parallel ‘lines’ on the forewings, suggesting lines of script.”   Now that we have determined that you are in fact among the minute percentage of our readership that might be considered “angry clients” that we refer to as Nasty Readers, and that the identity of your moth is Deidamia inscriptum, the mystery remaining for us is how did it stray so far from its typical range?  Bill Oehlke has offered some plausible reasons, and we don’t want to discount that you may have been trying to stump us as well as to taunt us, and that perhaps this image was taken someplace other than Nevada.  We will most likely never know.  Congratulations again on being awarded with our 12th Nasty Reader designation.
P.S.  We will not be posting your “email adress” as we do NOT post email addresses, so we are not responsible for your spam.

Trashface writes back and fesses up to internet plagiarism as well as being angry and a poor writer
First of all, you need to grow a thicker skin if you get offended by mean emails.
And secondly, don’t be a smart-ass. You know very well that I meant to say “if you spent as much time identifying bugs as you do crafting mocking replies…etc.”
But clearly wits aren’t your forte. A cleverer person than you would’ve realized that I just Google image searched “bug on middle finger” to find an offensive yet hilariously topical picture to send to you. I stole the pic from Flickr, which you probably think is deplorable too. Congrats on wasting time identifying a bug that I didn’t even take a photo of.
Bugger off, bug man

Ed. Note:  Far be it from us to assume what our readers mean to write when they send in inquiries.  We take their writing for face value and we do not correct their errors.  We had no luck locating the FlickR posting where this image was allegedly pilfered as we want to request permission from the actual photographer to keep it on our site.

Jeff Lanterman
January 12 at 10:56am
Did he think that was funny? Sometimes I don’t understand people.

Sean Gaukroger
January 12 at 12:59pm
Huh? Today’s Sphinx moth brought to you by the letter “F”?

Lisa Phillips
January 12 at 2:54pm
Thank you for the identification & sorry this person is rude. I myself look forward to your posts. Keep up your fascinating work ?

Heather Christensen
January 12 at 3:49pm
We love your posts! I have not yet submitted any critters needing identification, but my son and I always keep our eye out. This guy is a clown, and definitely deserves the coveted “Nasty Reader” title. Keep up the great work, we love you guys. ???????

One Response to Nasty Reader Award #12: Lettered Sphinx … in Nevada!!!