Is this the kind of scorpian that can kill people?
June 10, 2010
Hello WTB,
This morning I found that one of my sticky traps caught a scorpian. But because it is so small and the light colored one I was concerned after reading through your web site index that it may be the bad kind that can kill people. Can you please verify the speciecs, what I should do with it, and is the sting harmful to my dog and cat as well? Thank you!
Amanda in West TX
Near El Paso 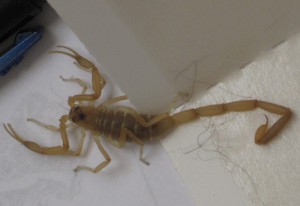 Dear Amanda,
We have always understood that Scorpions with small pedipalps, which Scorpions are able to use as hands, and large tails are the most dangerous.  Your Scorpion fits that description.  We tried to match it so the images on BugGuide, but we don’t feel comfortable beyond the genus level, and even that is dicey.  Our guess is family Buthidae, genus Centruroides, the Bark Scorpions.  Sadly, your photo does not show the shape of the sternum.  According to BugGuide:  “The family Buthidae is easily recognized by the almost triangular sternum. The sternum is located on the underside just before the pectines (combs).”  The coloration of your specimen does not seem consistent with the description on BugGuide for the Striped Bark Scorpion, Centruroides vittatus, which is indicated as:  “two broad stripes down back, with orange bars on each tergite (dorsal plate); hands and fifth metasoma (tail) segment are darker, especially in young and freshly molted specimens; broad stripe on the back of the tail.”  The Striped Bark Scorpion seems the likeliest candidate to us, but we would relish the opinion of an expert in Scorpion identification. 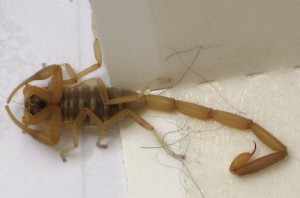 The defensive posture in your other photo is very interesting.  It seems the Scorpion has retracted its pedipalps to protect its head.  We alluded earlier to Scorpions using their pedipalps as hands.  The mating activity of Scorpions, which we have only read about, but never seen, is called a Pas de Deux or Dance for Two.  The male and female grasp one another by the pedipalps and move around the area as though dancing until the male finds a favorable place to deposit his sperm.  He then guides the female to his gift of life.

Unknown Spanish Insect may be Mealybug

2 Responses to Mystery: What's That Scorpion???