paper wasps and alien fungal spaceship?
Location: Ocean Beach, CA
July 27, 2011 6:18 pm
JULY 27, 2011
This is the 2nd year our yard is well-populated by old-bamboo-fiber-stripping lawn-level cruising maybe paper-wasps of some sort judging by looks and behavior.
Visually back-tracking them to their apparent home in a 30+ ft high mature date palm a half block away we discovered a very disconcerting structure.
We don’t know if the structure is related to the wasps or not because we can’t get up there (and frankly don’t want to without hazmat gear), but – well, you can see in the images that it’s highly coincidental.
So, omniscient entomologistas: Paper Wasps? European neo-bauhaus nest? Alien fungal growth?
ps: the city vector crew were nonplussed and apathetic, equally.
Signature: mrobertson 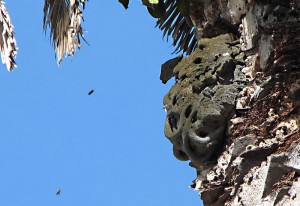 Hi again mrobertson,
We have already addressed the European Paper Wasp image you supplied, and we can say with assurance that this mysterious “alien fungal growth” is not related to the wasps, however, it does appear to have two insects flying toward it and though it is difficult to make out details, those insects have the same general appearance of Honey Bees.  Honey Bees do have a somewhat distinctive carriage while in flight, and the insects in the photo are consistent with that shape.  There also appears to be another insect that might be a Honey Bee crawling on the “thing”.  While this “thing” looks nothing like a honeycomb, it might somehow be related to a bee hive, but we are not sure how.  Perhaps the tree originally held the nest of a woodpecker, and dripping sap hardened and created the shape under the hole.  Bees might have moved into the vacant hole after the woodpecker left.  We will try to contact Eric Eaton to see if he has any thoughts on this matter.  For now, we will tag this as a mystery.  We have also taken the liberty of creating a composite of the two flying insects so that they appear closer together in the enlarged version than they are in the original photograph. 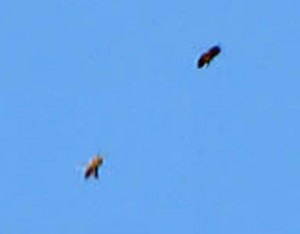 Apis and Inherent Omniscience
Dear Daniel,
Thank you for your time and effort.
Re omniscient: Not flattery, but an expression of hope – and thinking more along the lines of “inherent omniscience”, i.e., “the ability to know anything you choose to know that can be known” (various) and hoping that you would find out and choose to tell me as well. However let us not delve into teleological nomenclature but instead hear me admit that – I was afraid those were bees and your observation largely honks hours of patient sleuthing. Dang.
In 25 years here in Ocean Beach my madly ornithological ladyfriend has never seen or heard a woodpecker. We do however know what makes the holes: 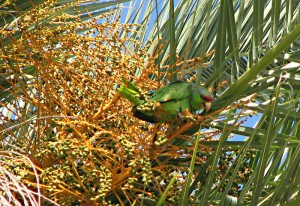 after which they nest in them of course.
Date Palm trunks don’t have sticky sap that would run, nor are their cellulose interiors in any way green or anything but white-ish.
I have read somewhere – LSU ento site? That some indwelling wasps may wet and soften the material of a wood enclosure (such as the studs in your walls or a tree cavity), chew the wood up and force it out of cracks or holes to allow the nest to expand – which may form strange extruded shapes.
But these are bees, right? Maybe they weren’t always bees…
Working at the limit of our prosumer cameras from a neighbors elevated driveway a hundred feet away we got a few more revealing images of the “weird thing”. 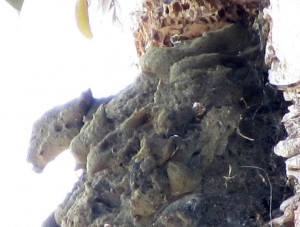 I feel the “thing” is associated with the hive – you can see damaged or melted comb cells or something like that. In one still inadequate image you can see what appears to be a bee on the lip of the “thing”. In another, darker image – the mass appears to have the glow of encaustic wax.
I don’t see any significant difference in the structural shape between the March and July images – and we had some serious rain which lends to a theory of water resistance.
I cut the “thing” image out, dragged it into a google image search box  – and that worthy AI returned images of cast busts of heads of Paul Tillich, John Gorton of Australia, an asian deity, assorted meteoric stone – and diving way down  – a Jurassic Termite Nest of sedimentary rock.
Oh well. Someday.
Finally, for the goosebumply thrill of it – an all time horrorshow yellowjacket nest image  – from upper Michigan I believe:
http://www.pestid.msu.edu/Portals/0/dnnPhotoGallery/955/626.jpg
one which makes me reflexively grab for my Epi-Pen.
Curiously yours,
/mrobertson
[edit note: Edit, Cut, Paste, Ignore. Download any image you might wish to use or save rather than linking, as things in that dropbox are not permalink. MSU EDU image not mine] 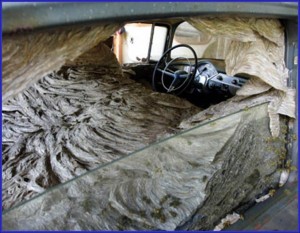 Hi Again mrobertson,
Thanks for the wonderful update.  We believe the image of the Honey Bee on the “Thing” supports our theory that there is a bee hive there.  Perhaps you didn’t notice the comment provided by Aariq who wrote:  “To me it looks almost like someone tried to get rid of the wasps by sealing up their hole with expanding foam, and then they just ate holes through it. That’s awfully high up to go through that sort of effort though.”

4 Responses to Mystery Thing in a Date Palm