Subject: what kind of bug is this?
Location: Newark, DE in the United States
August 5, 2014 11:46 am
My kids have been telling me about this crazy looking bug that has been eating bees in our back yard. But I have never seen one personally until today my son pointed one out with a bee captured in its mouth while both are captured in a spider Web! If you could identify this so I can explain to them I would greatly appreciate it alot. Plus for my knowledge also. Thank you greatly and Good bless.
Signature: Pyle Boys 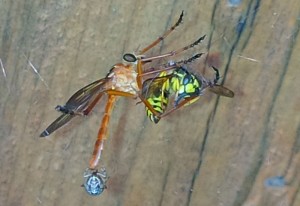 Dear Pyle Boys,
We need to begin by telling you we love your documentation of a multi-link Food Chain.  We only wish your image was sharp enough and detailed enough for us to be able to identify the Spider.  The flying predator is a type of Robber Fly known as a Hanging Thief in the genus Diogmites.  The Hanging Thief gets its common name because it often hangs from one leg while eating the large winged prey, often bees or wasps, that it captures on the wing.  The prey in question is not a bee, but a Yellowjacket. 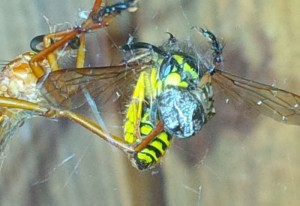 I am gonna attach a few more pics of the spider close up and hopefully this can help. And thank you for clearing up the curiosity for me and my sons! And glad you like the food chain effect my son thought it was cool how life works. Thanks again! 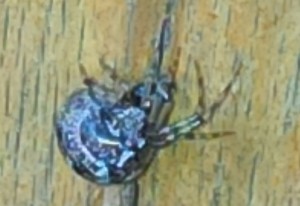 Thanks for sending the additional images, but unfortunately, the images are not critically sharp and it also appears that the color is decidedly cyan/blue, which makes the subtle coloration on the spider difficult to distinguish.  The Hanging Thief and Yellowjacket were quite obvious, but not so with the spider, which may be a Common House Spider, Parasteatoda tepidariorum.  You can see the resemblance to this individual on Bugguide.