crucifix window bug
January 9, 2010
Hi Bugman, Today we found this interesting looking creature parked on our window, in San Rafael, CA. It seems as if it has horns on the end of its ‘wings’. My friend calls it a ‘blood sucking satan fly’ but I don’t think such a thing exist. Another friend thought it was a reincarnation of Jesus on the crucifix. Sorry for the bad photograph, I was afraid to get closer / it biting me.
thanks in advance, jasmine
san rafael, ca, usa 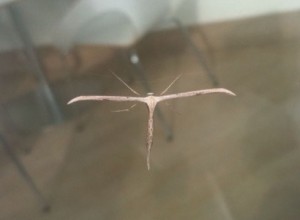 Hi Jasmine,
This is a Morning Glory Plume Moth, Emmelina monodactyla, and despite your friends’ theories, it is neither a maleficent nor a divinely benevolent species.  It will not suck your blood, nor is it representative of a miraculous event.  Many people call it a T Bug or T Moth.  It is a European species that was introduced to North America and it has spread from coast to coast.  The UK Moths website has some good information, including:  “One of the commonest of the ‘Plume’ moths all over Britain, and one of the few to be found in the early part of the year, as the adults occur in all months.  Like most of the Pterophoridae, the wings are cleft or divided, but this can be difficult to see, as the moth often rests with the wings rolled up tightly. The wing colour is usually pale brownish, but can be darker. Each pair of spurs on the hind legs has one spur longer than the other. The abdomen has a pale buff dorsal longitudinal band with brown streaks along the midline.  It occurs in any suitable habitat where the larval foodplants, bindweeds (Convolvulus and Calystegia spp.), occur. Larvae have also been reported occasionally on Morning glory (Ipomoea), Chenopodium spp. and Atriplex spp. They feed in two overlapping generations on leaves and flowers from late May to September.“

Wow, this is AMAZING!!
thank you so much for clearing up the mystery!