Look what is coming to the porch lights!!!
Location:  Mount Washington, Los Angeles, CA
August 6, 2012
The nights have gotten really warm and Sunday night, three of these unknown Longhorned Borer Beetleswere attracted to the porch light.  One was captured so that it could be photographed in the morning since unlike many creatures that are attracted to the porch lights, the Longhorned Borer Beetles are never around in the morning.  After an hour in the refrigerator, this normally very active beetle was lethargic enough to photograph.  This individual appears to be a female.  When she first came out of the refrigerator, her ovipositor was visible, but it quickly retracted.  These beetles appear each summer and we have yet to establish an identity.  We have placed a request with Doug Yanega, but we received an out of office notice and we don’t know when we will hear back from him.  We have also contacted Eric Eaton for assistance. 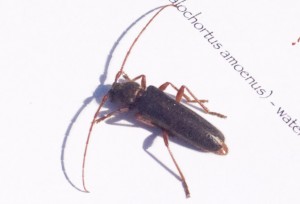 Last night, there were five individuals attracted to the light, including two that were significantly smaller, less than 3/4 of an inch in length.  The largest individuals have a body about 1 1/4 inches, not including the antennae.  The beetles are very active and squeak when handled. 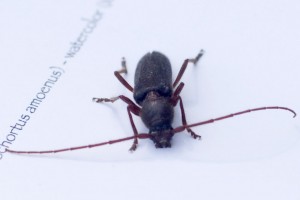 Eric Eaton Responds
Daniel:
My guess (and it is just that) for the Mt. Washington longhorn would be Paranoplium gracile:
http://bugguide.net/node/view/429497
but I’m sure Doug could confirm or refute.
I think the ID on the Neandra is correct.  I don’t believe they are rare, just not encountered very often.
Eric

Ed. Note:
BugGuide does not provide any specific information on this species, however, we did find an online book, The Field Guide to Beetles of California by Arthur Evans and  James N. Hogue that provides this information:  “The sole species of Paranoplium, P. gracile, (12.0 – 24.0 mm), whose larva feeds on oak and other hardwoods, is active in summer and is divided into two subspecies of dubious validity.  Paranoplium g. gracile is found along the coast from Monterey County to San Diego County, while P. g. laticolle lives in the southern Sierra Nevada. ”

Doug Yanega Responds
August 14, 2012
[My first thought] Given the size and profile, I suspect this is one of the various Phymatodes. I have yet to become fully acquainted with the west coast bycid fauna, however. It is, at the very least, in Cerambycinae, which narrows it down ever so slightly.  Looking at the photos, and comparing to specimens in our collection (rather few, actually), I would support Eric’s ID on this one.