Subject: Is this a democrat bug?
Location: Springfield Missouri
September 29, 2012 8:59 am
I can’t tell from the picture on your website if this is an eastern box… bug I would just like a confirmation. These were found outside of my workplace in downtown Springfield Missouri.
Signature: CuriousKids 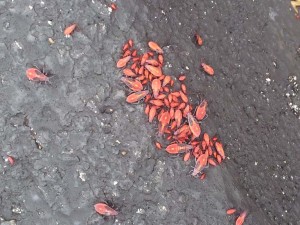 Dear CuriousKids,
Your identification is correct.  This is an aggregation of Eastern Boxelder Bugs which are sometimes called Democrat Bugs.  Your individuals are all immature nymphs, though at various stages of development or instars.  Adult Eastern Boxelder Bugs have black wings with some red veins.  Sightings this year have been plentiful.