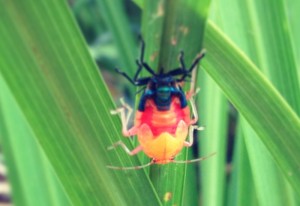 Hi Rachel,
This is not a beetle.  It is a True Bug, probably a Stink Bug.  It is in the process of molting and the cast off exoskeleton is the dark bluish black portion of the insect.  The new exoskeleton is still soft and it has not attained its natural color, and it is represented by the red and orange portion of the insect.  Because its markings are not clearly identifiable since the new exoskeleton has not hardened and darkened, it might be difficult to get a precise species identification.  True Bugs go through five molts resulting in five distinct nymph instars, and they often vary in coloration between molts which can make identification even more difficult.  Generally, adult insects tend to be easier to identify.