Flat backed millipede riders
Hi,
I know this is a flat backed millipede, but what are those mites riding on it? Maybe you could ask Barry M. O’Connor for me? I snapped this photo on 06/11/06 in Port Orchard, WA – he’s about 2″ long. Many thanks,
Kevin
PS – that big bug from ‘toe biter’ that you never identified – the bug in a jar that died at school? It didn’t die from the stress of being at school, but probably from the stress of not being in water as it is a water beetle. 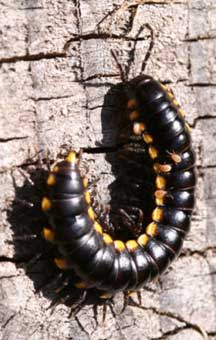 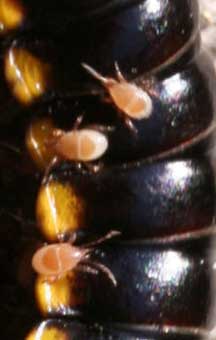 Hi Kevin,
We will post your letter and try to get the answer you requested. We can’t seem to find the letter you cited. Please give us a page and date.

Barry OConnor Responds:
Hi Daniel – The division of the dorsal plate on the back of the mites on the millipede, and the smaller size of the posterior part indicate that these are deutonymphs (last immature instar) of the family Parasitidae. Despite their name, parasitid mites are not parasitic, merely riding on their host from place to place. The name dates to an 18th century misperception by the French naturalist Latreille who observed these mites on a beetle and thought they were parasitic and named them “Parasitus”. The rules for naming animals require that the first scientific name given to an animal is the one we use, even if it turns out not to be appropriate. These mites normally inhabit rich but patchy sources of organic matter like manure or carrion where they feed on nematodes or fly eggs/larvae. It’s rather surprising to see these on this millipede; they’re much more commonly seen on scarab, carabid & silphid beetles that frequent such substrates. Others are specific inhabitants of the nests of small mammals and bumblebees, and their deutonymphs ride on those hosts. Other parasitids live in the soil and prey on other microarthropods but don’t use other animals to disperse since their habitat is more continuous. Glad to help – you always have cool pictures!
All the best! – Barry