Costa Rican millipede
April 7, 2010
Hi bugman :]
I thought you might like this picture of a millipede we found in Costa Rica in the Monteverde cloud forest region. She had babies that were so tiny you could barely see them hiding above her legs and underneath her outer shell. When you bother her, she secretes a fluid containing cyanide. It smells like almonds. I looked in your millipede section and she looks a lot like some of the millipedes there, but many of those were from the U.S. Do you know what kind of millipede she is?
Steiv
Monteverde, Costa Rica 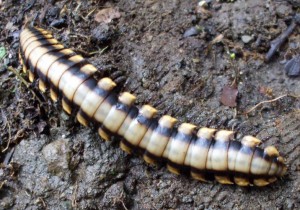 Dear Steiv,
Thanks for sending your Millipede photo with the observational data.  We are curious about your comment about the babies because we were not aware of Millipedes transporting their young about.  We tried to research this behavior, and we found two sources with identical information.  According to the Millipedes at Animal Corner website:  “Millipedes lay their eggs in the soil. Some species make individual cases for their eggs out of chewed-up leaves. In some species, the female, and occasionally the male, guard the eggs until they hatch. Although young millipedes resemble small adults, they are usually have no legs when they first hatch from the egg. After they molt, or shed their exoskeleton for the first time, they have six body segments and three pairs of legs.”  We found the identical information here at a Diplopoda Behavior and Reproduction website.  We wonder, perhaps, if there were mites or some other creature living on the Millipede.

3 Responses to Millipede from Costa Rica