Subject: Red Milkweed Assassin Bug
Location: Baton Rouge, LA
December 12, 2012 11:57 pm
I found two butterfly caterpillars and several chrysalis on my Cassia and Esparanza plants. One of the chrysalis was discolored and somewhat shrunken. I later observed an insect that appeared to be attempting to penetrate a chrysalis. An internet search revealed that it may be a Red Milkweed Assassin Bug, I have attached a photo of my bug on a chrysalis and the one from the internet. Please verify my findings are correct. I recently obtained some milkweed plants from a nursery to attract Monarchs.
Signature: ClydeO 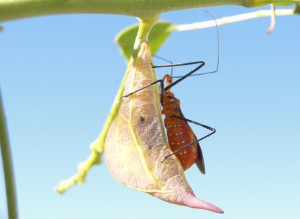 And, I was lead to believe that Monarchs have a fool-proof toxic defense by feeding solely on the Milk Weed plant.
Thanks for your response – great website.
ClydeO

Monarch Caterpillars do have some predators.  See this Stink Bug posting.

Well, this is what the Assassin Bug did to one of my chrysalis . .
ClydeO 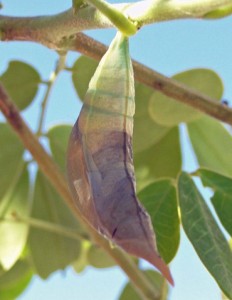 Hi again ClydeO,
While this is sad, you should bear in mind that there are predators and prey in the insect world, and predators like the Milkweed Assassin Bug also help to control the populations of other harmful plant feeding species.

I considered that when I contemplated squashing him.
ClydeO