Hi,
I found this little guy in July here in Bend, Oregon. It only stayed around for this one shot and flew off. It’s maybe 7/16" long. It is quite beautiful and I would like to know what kind of beetle it is.He mentioned he would like to be ‘Bug of the Month’ as he flew off. Thanks,
John 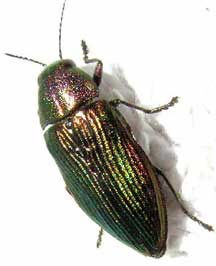 Hi John,
This is one of the Metallic Wood Boring Beetles in the family Buprestidae. We believe it is Buprestis decora because of a match we found on BugGuide. We can’t find the range on Buprestis decora, and there are several other beautiful members of this genus that are found in the Pacific Northwest. When Eric Eaton returns from holiday in the east, we will try to get an exact species from him. As a side note, the Bug of the Month is generally a seasonal occurrance, meaning, people from all over the country or at least a major part of our readership is sighting a species at a certain time. Your lovely Buprestis decora might be a likely candidate for a Sighting of the Month, the most unusual specimen we received in a given month. At any rate, it will be on our homepage for about a week.