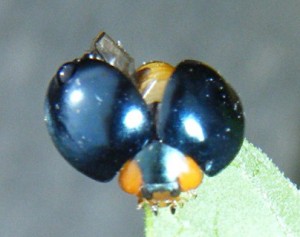 Lady Beetle love
Location: South Point , Hawaii (Big Island)
June 26, 2011 3:53 pm
Hi again :D. This lovely lady was crawling across my patio when I went to my garden today. I was delighted to see it as I had just seen an image (I believe on this site)of a blue Lady Beetle from Volcano, HI. At least I think it’s a lady beetle–correct me if I’m wrong ;).
Here in Hawaii I’ve only see a few ladies over the years but none that weren’t spotted in familiar ladybug fashion. I used a pruned tomato leaf to let it crawl on for these pictures then put it in my garden.
Signature: Dasi 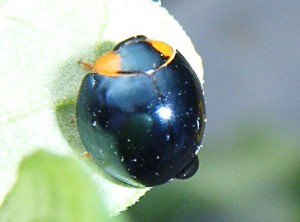 Hi again Dasi,
We got a bit sidetracked on this identification because in searching Lady Beetles from Hawaii, we found this Insects of Hawaii photo gallery and we spotted the Black Stink Bug you submitted earlier that we misidentified as a possible Leaf Beetle.  The gallery also shows a Lady Beetle that looks somewhat like this individual and it is identified as Curinus coeruleus.  We cross checked and found the Metallic Blue Lady Beetle well represented on BugGuide where we learned it is “Native to the Caribbean but widely introduced for biological control. Apparently imported to Florida from Mexico in the 1950s” because it feeds upon “Normally scale insects (order Homoptera, suborder Coccoidea), but also will feed on aphids and the Asian Citrus Psyllid (Diaphorina citri).”  We don’t know if it was purposely introduced to Hawaii or if it is an accidental introduction. 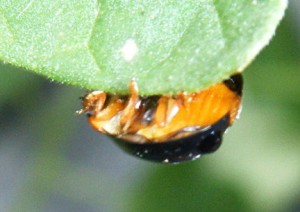 Correction:  March 24, 2013
Thanks to Luc from the University of Hawaii Insect Museum for informing us that this is Halmus chalybeus, though the photo on BugGuide lacks the orange markings and attributes those markings to our original identification of Curinus coeruleus.  Perhaps BugGuide is wrong as well.