Big bug, Chicago IL area
Hello,
I hope you can help, this is the biggest bug I’ve seen around here – okay, insect. It’s a flying insect, yellow legs, about 1.2" – 1.5" long (not counting antennae), with a huge "tail", probably 4" long –
actually some kind of boring tool. There were several of these flying insects on a tree, looked like an elm that died within the last year (top branches’ bark were coming off, but not the lower trunk yet, where these bugs were), and they were boring holes into the tree, I assume to lay eggs, although that tail was too thin for eggs it looked like. The tail at first glance was one long tail, but then you could see there were a couple parts to it that were often kept together. I’m including two pictures, one a profile while it was boring into the tree, another after it flew into the leaves, and you can see its tail hanging down and just how long that is. Some of them had different shaped/colored thingies on the end of their abdomen, this one had the clear/silver disc thing. My immediate concern was an Asian long-horned beetle or emerald ash borer, but it was neither of those (also big bugs, with long appendages), so I assume it’s not something too nasty.
Rob 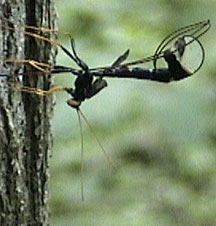 Hi Rob,
What a colorfly descriptive account of the egg laying process of a Giant Ichneumon, in your case Megarhyssa atrata. Her young will feed on the boring insects inside the dead elm tree, insects which might even be responsible for the tree’s demise, so the Ichneumon will help prevent a future tree loss.