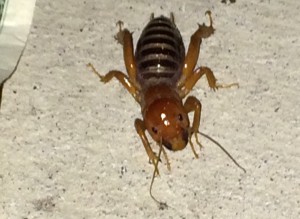 Subject: Meet my newest, weirdest friend…
Location: San Diego, CA
October 13, 2014 12:22 am
Hey guys,
I’m baffled. Found this guy skittering along the sidewalk in front of a friend’s house around midnight. Looks like some kind of huge, wingless wasp/ant/kewpie doll. It’s thorax, legs & head are all “ant red”, if you will, while its abdomen is this incredible striped black & gold. Couldn’t tell if he has a stinger, but he’s pretty big (thumb-sized) and has great legs. When we locked eyes (yes, he’s big enough that I could see them clearly), I could swear we shared a moment. Hahaha!
Signature: Bella 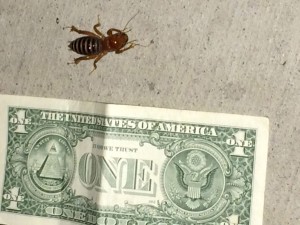 Dear Bella,
This magnificent and unforgettable insect is a Potato Bug or Jerusalem Cricket, two common names for an unusual group of insects in the genus Stenopelmatus.  Potato Bugs are rather iconic Southern California insects, and their large size and humanoid appearance make them one of our most frequent identification requests.  They are very common, though they are not encountered that often because, according to BugGuide:  “Most of their lives are spent underground. Damp, sandy soil is preferred.”

6 Responses to Meet a Potato Bug