Subject: Mating Swallowtails
Location: New Cambria, Missouri
July 25, 2014 3:45 am
I took this photo yesterday of these two different (species?) of Swallowtails mating. Is this common? Can it result in viable offspring or a hybrid butterfly?
P.S. LOVE this website. It has been very informative.
Signature: Denise 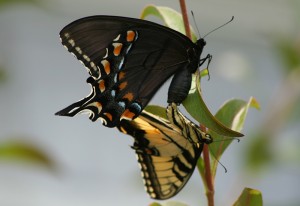