Red-footed canibalfly(?) and bug love
Location: Kirksville, MOAugust 18, 2011 6:50 pmI’ve been seeing a large number of these robber flies around the area for the past month or so, now. Their size is very impressive. I had been wondering what kind they were, exactly, so I was very happy to see so many photos of the red-footed cannibalfly on your site. That’s what it appears to be, at least! Some of them buzzed so close that I feared they were horse flies (which have also been very thick, lately). I felt a little silly (and relieved!)when I realized that the giant insect that had landed on my shirt while I was hiking was just a robber fly. I spotted a number of them along the trail that were mating, as well and I had to snap a few photos because robber flies are some of my favorites – their little muttonchops are just so charming!
Signature: EB 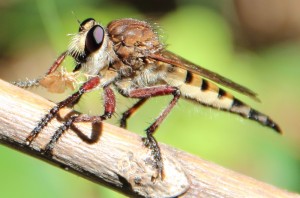 Dear EB,
We love your stunning photographs of Red Footed Cannibalflies eating and mating.  We hope you don’t mind that we cropped and rotated them to fit our format. 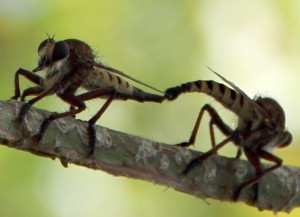